Lew Zealand said:
Two Prismatic Shards and the Dinosaur Egg?? That's my total from 3 full saves plus at least 4 more taken partway through Year 1. I see from your top row however that you leave little to chance.

I expect to see at least 2 partial animal skeleton reconstructions in the Museum by noon tomorrow with all those bones or you'll be receiving a visit from the local Paleontological Society to establish a few ground rules. Or possibly to play some tennis, who knows? Feel free to include the Rabbit's Foot as clearly you won't be needing that little guy any more.
Click to expand...

Yeah i need the rabbit’s foot for the community center, i think i get it while sweating on the serpent as they did so many damage, the bones is from the historical room where there like a bunch of dinosaurs and flying bugs, i planned to go fishing that day as I normally do but because it’s a lucky day so i go to skull cavern, didn’t expect these lucky things to happened

I got a fairy one time

I got an ancient seed on the first day and then in my second year I got 2 meteors in the same week. An then later in my 2nd year got a void chicken from the witch and a dinosaur egg.

I once had two meteorites in a row. Then i got an ancient seed from killing mutant bugs in the sewers

I think this is my luckiest save yet. I got the dino egg before the end of Year 1. The crop fairy visited at one point in year 1 (summer, I think?). I got the ancient seed before the end of winter, year 1. The witch visited early in Spring Year 2. THEN, I got not one, but 2 giant cauliflowers. Now, I'm on Day 15 of Spring 2 and I got a prismatic shard off a green slime in the Secret Woods! What the heck. I'm waiting to find that my entire farm burns down or something. That's too much good luck.

My main save is mostly just average in terms of luck, but one time I started up a new minor farm and got the crop fairy on the first night. The next morning I got to harvest all of my parsnips, which felt rather insane.

I would say I was extremely lucky in my second playthrough. A fairy came at the first night spring year 1. Got ancient seed at the first week. Got 2 prismatic shards on the mid of fall year 1 from skull cavern. Able to unlock sewer on early fall year 1 so I can buy iridium sprinklers from Krobus.

I got a Neptune's Glaive before the Mines even opened.

Staff member
yooooo i got the strange capsule recently! i was so attached to it! my baby! my sweet baby!

ThatOneGuy said:
I got a Neptune's Glaive before the Mines even opened.
Click to expand...

I got the trash hat and 3 Dino eggs!

Not particularly rare, but I had a meteorite the first spring of my first farm. I'd say it was somewhere around Spring 15-20. The thing is, I was playing a Riverlands map and it landed on the island with Grandpa's shrine. So a combination of factors - largely because I was still a newbie - led to me not discovering it for weeks, maybe even a whole season later:
Also, because it was my first playthrough, my progression was... inefficient, to put it nicely. So when I FINALLY found the meteorite, I was unable to crack it open with my copper pickaxe. I upgraded to steel, and anxiously waited for Clint to finish the upgrade, only to find out that steel still wasn't strong enough either!

When I finally broke it down, I was thrilled to get iridium ore, but it would be quite a while before I would get more of them (again, stunted learning curve on first playthrough). I made a sprinkler with them, but wasn't able to make any more for a quite a while after.

I have a trash hat. I'm not very lucky. 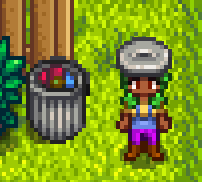 ISSsloth said:
I have a trash hat. I'm not very lucky.
Click to expand...

See... weird thing? I found THREE in my first save. I've got three more saves... not even one.

There was the meteor that struck my MP farm in spring year 1 which was nice as there was nothing for it to destroy. Same game, I have never found a single secret note (in an any of my games solo or otherwise DIDN'T EVEN KNOW THEY WERE A THING) and yet my partner finds them about 2 per day or two

VakuurBairn said:
Same game, I have never found a single secret note (in an any of my games solo or otherwise DIDN'T EVEN KNOW THEY WERE A THING) and yet my partner finds them about 2 per day or two
Click to expand...

You have to enter the bus stop from the farm before 4pm on some day, any day in winter.

redbobcat said:
Summer year 1 while fishing got a Dino egg and an ancient seed in ONE chest and right after saw a sea monster (or mercreature).

Also had an alien capsule crash on my farm once in another game. Meteors land in almost every game, so does the fairy. The witch event only happened to me once though.
Click to expand...

Are you sure this is not modded? I have never heard of this.

VakuurBairn said:
There was the meteor that struck my MP farm in spring year 1 which was nice as there was nothing for it to destroy. Same game, I have never found a single secret note (in an any of my games solo or otherwise DIDN'T EVEN KNOW THEY WERE A THING) and yet my partner finds them about 2 per day or two
Click to expand...

Do you have the magnifying glass in your wallet?
If not, listen to @imnvs and follow the quest. It's called winter mystery I believe.

PorkChop said:
Are you sure this is not modded? I have never heard of this.
Click to expand...