Staff member
Please report all the typos and translation errors in this thread!

(image may be a potential spoiler for those who have yet to play the updated 1.5 game)

I was reading through a cut scene that had a spelling mistake.
I think it should be "...jobs that* would make sense..." instead of "than"?

meepmeep said:
(image may be a potential spoiler for those who have yet to play the updated 1.5 SDV game)

I was reading through a cut scene that had a spelling mistake.
I think it should be "...jobs that* would make sense..." instead of "than"?
Click to expand...

I noticed that too. Definitely a typo.

As i posted here https://forums.stardewvalley.net/th...tfix-list-of-german-localization-issues.3311/ :

Here I want to report a small list of localization / translation bugs with the new 1.5.0 for the german version. While using a couple of basic mods like Automate or the CBJ item spawner, I'm certain they don't or shouldn't affect the translation.

Infinity Blade, Infinity Dagger, and Infinity Gavel => All have the name "3" instead of the correct one
Phoenix Ring => Does not contain a german translation
Junimo Chest => Does not contain a german translation
Mr.Qi challenge related to deliver food worth of 100k => Maybe the german text can be revised. It is somewhat unclear (at least for me) how to solve the quest as even with cheating i wasn't able to solve it.

Mr Qi quest, where you have to catch all legendary fish childs. Quest description says you have one day but actual quest timer shows three

Every available fish tank is correctly translated to "Aquarium", with exception of the one from Mr. Qi shop at ginger isle. It is called "Aquatisches Gebiet" which sounds kinda weird.
Last edited: Dec 24, 2020

meepmeep said:
I was reading through a cut scene that had a spelling mistake.
I think it should be "...jobs that* would make sense..." instead of "than"?
Click to expand...

ChemMixer said:
I noticed that too. Definitely a typo.
Click to expand...

That's a correct use of "than" and not a typo. While you could also say "bigger jobs that would not make sense...", the use of "than" makes it a comparison. For example, "Shane is older than Jas". Lewis is saying the job postings on this board will be bigger than the ones posted on the board outside Pierre's.

When interacting with the rock blocking the stairs near the train station, it says "Parece ser impossível mecher..." (It seems it's impossible to move), but the word "MECHER" should be "MEXER". It's a kinda common mistake in our language and it's such a small piece of text, but I thought it wouldn't hurt to post here!
Here's a screenshot: 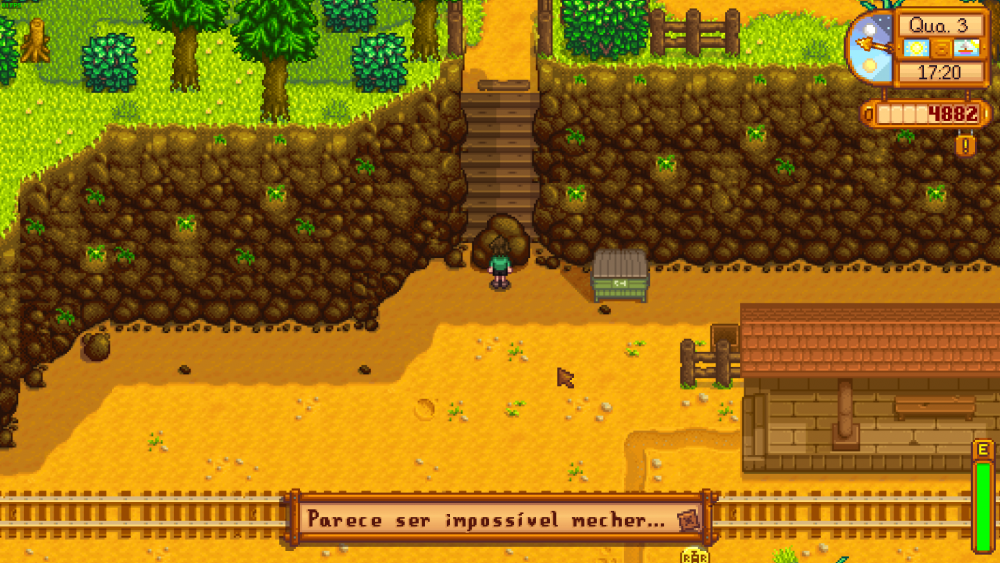 wikktoria said:
Hello! I think it's a typo and it should be my instead of me, but I don't really know? I thought it's a good idea to post it here, tho.
Click to expand...

That's just a casual way of speaking, while it's not "correct" English, it's in character for Willy to say :)

Oh, I'm glad there's a thread for this! I've compiled a few so far in the French version, but I'm not a native French speaker so please forgive me if I'm off the mark. I am playing version 1.5.1 on PC. Another thing to mention is that I'm doing multiplayer with a friend whose game is in English.

When I take a task from the Special Orders board, it shows up in my friend's journal as French even though her game is in English. If she takes a task, it correctly shows in my game in French and hers in English.

I believe the Summer Luau event has a typo in Emily's dialogue, but I clicked too quickly to take a screenshot, so I don't remember what it was. If I saw it again, I'd be able to point it out.

I believe this should be "Peu importe," not "Peut importe": 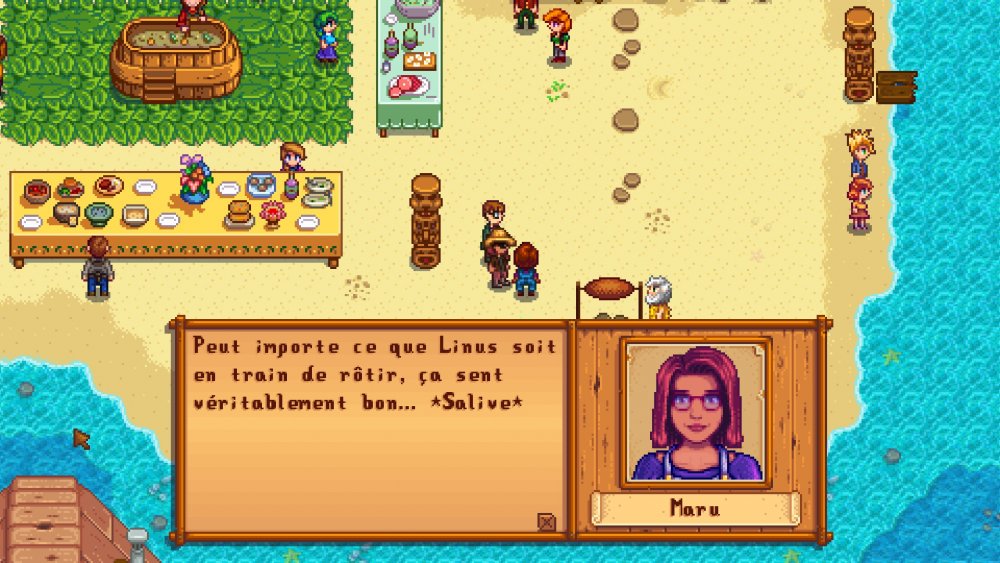 There also appears to be an issue with fetching the farm name, as every time the game tries to, it ends up displaying "%ferme" instead of the proper name. If it makes a difference, my friend is the one hosting the game. I'll try to grab a screenshot next time it happens; it took me a few occurrences to realize what was happening.

Eating a star drop ends with the text "rappelle___" where the ___ is whatever you inputted for your favorite thing. There should be a space after "rappelle" and after the exclamation point. 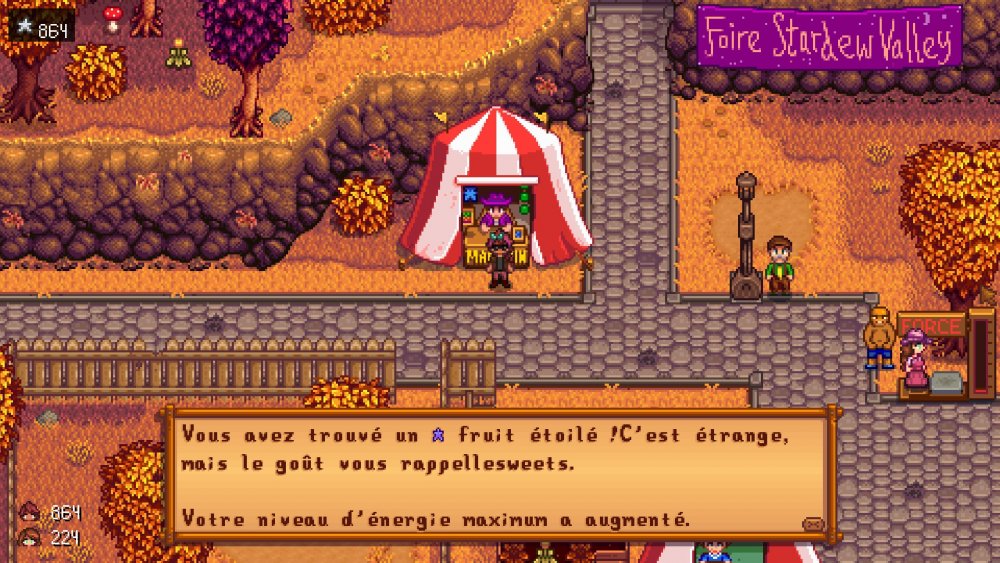 Hey, I have found 3 translation errors :)

The cutscene with Linus, where he's taking a bath in mountain see is completely english and not translated.

If you're ordering something from Robin, it's written something like: Du hast a Silo in Auftrag gegeben / beantragt (idk :D) - It's always "ein", not "a"

And another thing, I don't know, if it's a bug or a translation error, but if you take a quest from Robin where you have to collect 1000 stones (from this big board under Lewis House) the Quest is something like "Sammle folgende Ressource", so you have to search for yourself, what she wants (like stone, wood, ...).
Last edited: Dec 25, 2020

1. Robin, "summer_Mon": "Wood is a wonderful substance... it's versatile, cheap, strong, and each piece has it's own unique character!" Possessive its lacks the apostrophe.

3. Couldn't find this in the files and I'm not positive it's not a mod (though I didn't see this in my mods data either): Penny's at the saloon with Sam, and says something along the lines of, "Have you tried the sliders? The sauce Gus serves with them is delcious". Delcious vs delicious.

Reposting from a dedicated thread now that there's a typo megathread—not sure if these typos exist in 1.5.1!

Spirit's Eve Festival: Evelyn and George's lines are identical to the Fair lines; Evelyn says "I wish Gus would include a vegetarian option. Some zucchinni skewers, maybe?" and George says "Hmm... smoked turkey haunch? I guess this festival isn't all bad."

Lines are in the festivals folder in data; fall16 and fall27 lines.

Other typo: zucchinni instead of zucchini.

"Mill" is not translated into French ===> "Moulin"

Bone Mill is not translated into French. BigCraftablesInformation.fr-FR.xnb

Special Orders, Robins quest to gather 1000 X. In german only a placeholder for the actual ressource appears: "Ressource:Text" instead of wood or stone, in the description on the board and alsoin the quest log. So you won't be able to know which to gather.

In the Stardew Valley Fair's Slingshot Minigame - the text at the end has succesful not successful.
Last edited: Dec 28, 2020