Introduction
Here it is, the 1.4 update of my very first mod! I completely overhauled him, and rebuilt him from the ground up! This was my very first mod I ever made, and I wanted to redo it. Now with fresh and cleaner code and a nice lemon-lime scent! (note: only your game can enjoy scent not detectable by human noses)

Meet Nagito!
There are *two* versions of the NPC in this mod, referred to as Canon and Lore. Lore is the default option.

Canon is the classic mod. Nagito Komaeda from the Danganronpa series in a (hopefully) immersive way, the one former players would be familiar with. He's the same as before but with fixes and 1.4 compatible. Dialogue contains a few references to the series. ;)

Lore is more adapted to fit into the world of SDV. I still tried to make sure he's clearly Nagito, but gave him my own spin too. This option is for anyone who is lore-friendly, wants a change of pace, or who doesn't care about Ding Dong Grandpa.

Nagito grew up on the Fern Islands but moved to Pelican Town to enjoy some peace and quiet. He's a bit awkward and keeps to himself, not to mention very superstitious... Will you be his friend?
Click to expand...

Features
- 100% 1.4 compatible. Take him to the movies! He sleeps at night in pyjamas like all the cool kids!
- Two options for the character to best fit you and your game!
- Seasonal outfits for both lore and canon!
- CustomKissingMod and NPCAdventures compatibility
- Also has unique courtship responses like the ones from this mod!
- Marriageable (14 heart event in a future update) and has custom child sprites (can turn off in config, will only trigger when married to him)
- Optional Download offers patches for various JSONAssets mods to give him proper gift tastes and reactions! (Update: removed for now to see about better coding).
- A resident of East Scarpe if you have it installed!
- Hi-Res portrait addons! Hand-drawn to match either DCBurger's or Shie's portrait mods! (Lore only and non-seasonal, I'm afraid) 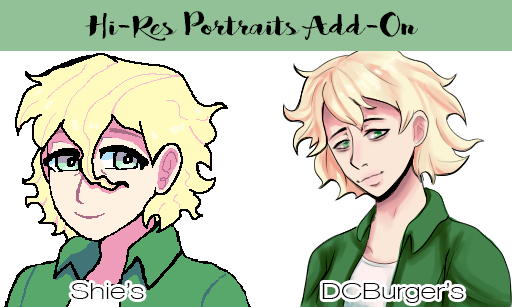 JSON Assets Patches
This is an optional download to make Nagito properly react to new items added by JA mods. Otherwise, he wouldn't and you wouldn't be able to earn or lose friendship points when gifting these to him. View the spoiler below to see what mods there are patches for. Make sure you install them first and then overwrite with my patches.

Note about the PPJA Recipes: the folder may be named differently so it won't be a simple drag-n-drop depending on if you installed it via the Project Populate JSON Assets Collection or not. Removed for now.


* means it's a JA item. You must have the patches otherwise giving him the item won't work.
Birthday is Spring 28.

Don't need to be done in order. Some events are the same with slight changes depending on version, while Lore has two new events.

His favourite film is 'The Miracle At Coldstar Ranch'. He also likes the 'The Zuzu City Express' and the documentary.

For snacks, his favourite is Joja Cola. He likes salty, healthy, and fancy snacks and dislikes the sweets and candy foods.

Final Comments
Did a lot of testing, but it's possible I missed some things. Please comment letting me know if you find any errors, and what version of Nagito you're playing with. Other than that, good luck, have fun!