Last time I played the game was on the 1.3 patch, or possibly a bit on 1.4. Therefore a whole slew of content is brand new to me, and I didn't realise how much until I started playing. Or rather, until I had played 100+ hours

The farm is called Headbangers Farm, and is run by a chap called Angus. He is married to Leah (in year 3 I believe), and we have a child. It's now into summer, year 4, and seems to be doing quite allright. First time ever, I had the chance to spunk most of the money on the Gold Clock, which I did on Spring 28 to make the spring-summer transition easier. Have also bought 3 of the obelisks, including to the desert and "island". The island itself has been confusing as all hell, and I spent and ungodly amount of time scratching my head and wondering what to do in the volcano. Yeah, the leaking pipe and blackishness underneath was clearly supposed to be a clue, but it flew well over my head I'm sad (and embarrassed) to say. Eventually I picked up what to do somewhere, but I forget if it was the wiki or discord or reddit or whatever. Don't have much of a farm over there, haven't focused on it, but have found about 90 golden walnuts, so that's a nice start.

And although it took even longer than the blasted volcano, at least I figured out on my own that maybe it was a grand idea to try a freakin' bomb by that boulder. For a while I thought the idea was to use the upgraded pickaxe with "Powerful", which I didn't get, so am glad I tried something else before burning some of the relatively few prismatic shards on it in the Forge. So yes, that thing has been unlocked. Took a few tries before I was able to find the way to the last door on level 9, and ran out of time several times there. But on the 4th or 5th try I had enough time to whack enough enemies and step on the right plates, and there we were. All very new and exciting!

Anyway, back to the main farm. Haven't focused much on animals, but do have a max-sized Coop and Barn. A rabbit, dino, duck, two void chickens and a chicken in the coop, and two cows and two pigs in the barn (both magically doubled in quantity through pregnancy). I wanted to try out the fish ponds, and have 8 now. One of them has eels, which was intended for easy access to eels for Spicy Eel recipe, but enough of them have fallen as loot, and the roe isn't worth much, so I'm thinking about replacing them. Besides, I've never been back in the Skull Cavern since managing to get to level 104, and getting praised by a nice chap for not using (many) stairs 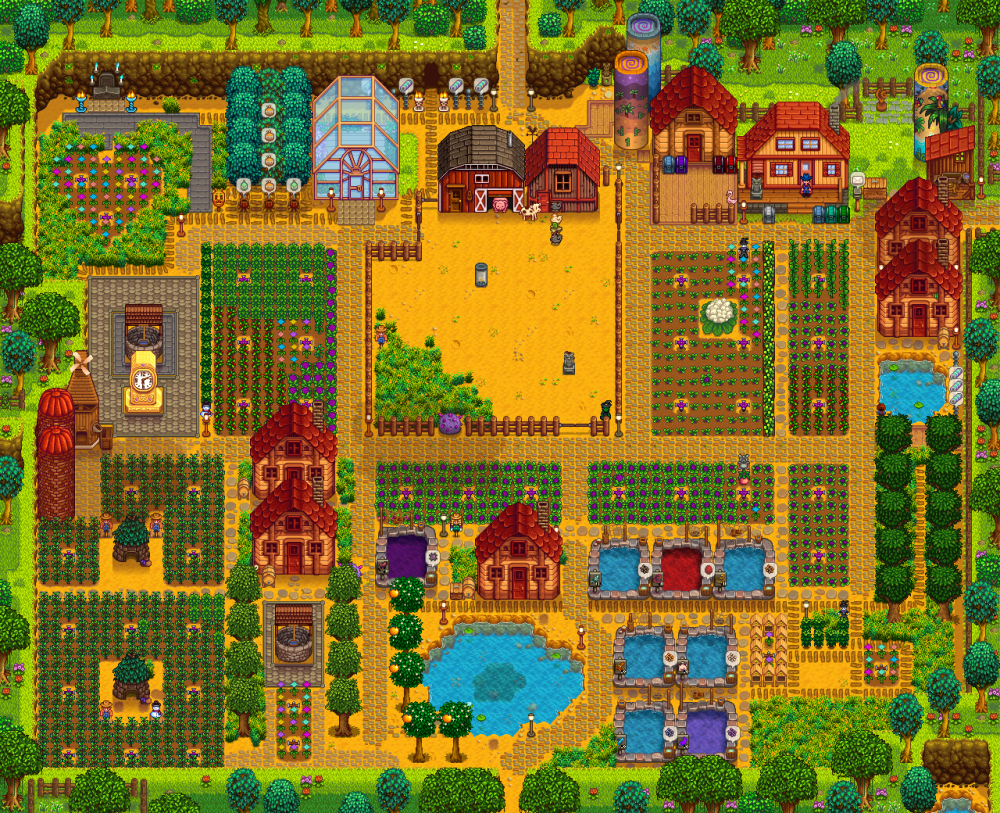 Just ahead of summer I invested in those two Junimo huts, which I have never tried before either. Very cool! Never had a full farm like this, and so many crops are stressful, so therefore it was great to get some help from the cute little pillows. Sometimes I find it relaxing to go around picking up several hundred crops, but mostly the whole thing is stressful tbh, especially if I don't have the seeds to replace melons or whatever. Currently it looks okay, but I had to place down some random leftover flowers to protect the fertiliser and ground.

I'm not sure what is up with the animals, but seems like the grass is too far away? I've noticed the hay quantity has reduced, despite it not raining, so maybe they don't venture far enough south to eat? The whole thing is a bit weird. Usually half the farm is filled with random trees and grass, so it's easy to replenish the silos, but that isn't really the case here.

The shed next to the house has some machines. It's not as practical to have them in there, but it makes for a better-looking outside, and I wanted to get rid of some of the chests and machines that had been sitting by the shipping bin since day 1. Some chests are still outside, because I'm lazy... and because it's practical. The shed closest to the stable (which I had never built before either), is filled with jars, and the four others with kegs. That took a loooooong while to make, but it's done now, and they are for the most part full. The idea was to have two obelisks right of the house, because that worked in the planner, but apparently it doesn't fit in the real game. Shame. It looked quite nice.

Sorry if that was an overlong introduction or background. How does it look so far? I've tried to stay away from the more industrial look with stone/wooded paths everywhere, so take that into account, but any suggestions for what I could do differently? Or something else to add? (except slime prison, because I don't like the look, nor do I want those buggers on the farm :P )


PS: Hard to see now, but there is a second meteor behind a tree NW of the lake, and there was even a third one, but I 'destroyed' it. It smashed down in the would-be flowerbed south of the well. Have also cracked open all but one mega-crop. I see many design around them, but I'm thinking about cracking open the last one too

The below image is probably from year 2, so things have developed since then 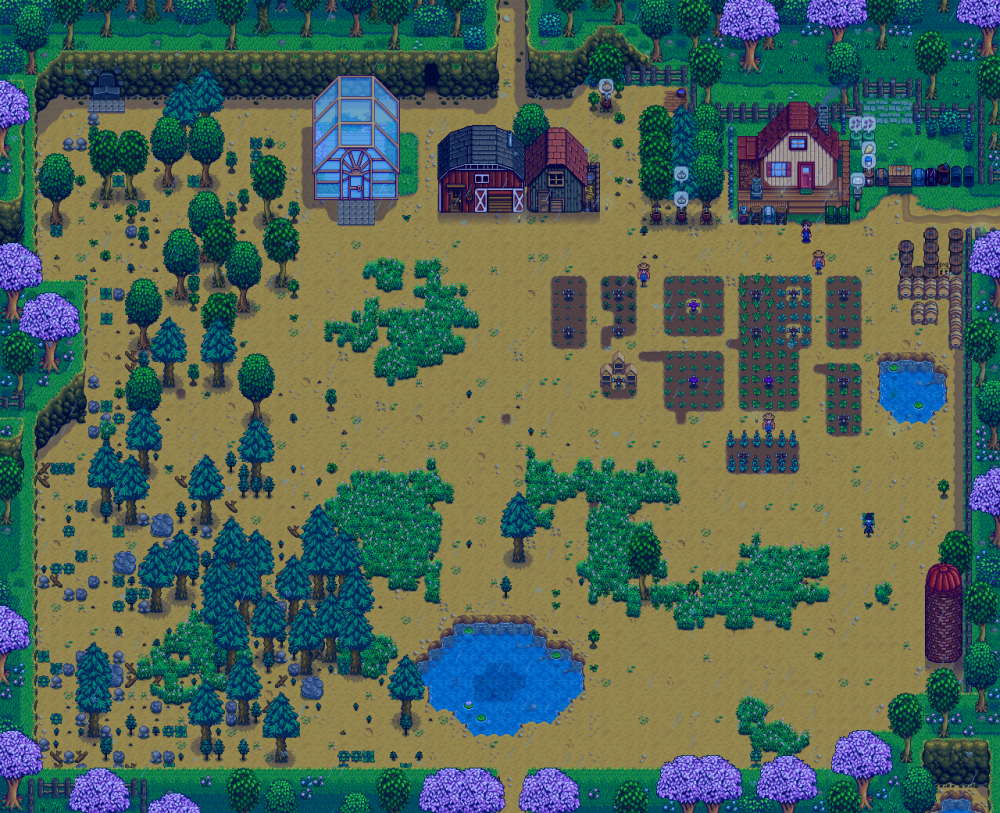 Very cool, when my farm is farther along in its progression I plan on making an evolution montage of the farm

A farm called Headbangers owned by a farmer named Angus can only be an awesome farm without a single doubt. But with such a name, you should have married Sam, not Leah !

I like the global design of your farm, especially the various alleys of trees and the flowers heart!

Unfortunately there isn't a woman named Rosie in this world. But one of my cows is!

Thank you for the nice words :)

I like the scattered flower patches and, of course, the orchard. (Nifty heart up top!)
Re the grass, there’s the trick of putting down grass starter and plunking a fence post/flamingo/other item on top so it never gets completely eaten. Then you get pasture/art installation in one, if you want to go decorative, and there’s at least one useful item you can use as a grass preserver.

Jayamos said:
I like the scattered flower patches and, of course, the orchard. (Nifty heart up top!)
Re the grass, there’s the trick of putting down grass starter and plunking a fence post/flamingo/other item on top so it never gets completely eaten. Then you get pasture/art installation in one, if you want to go decorative, and there’s at least one useful item you can use as a grass preserver.
Click to expand...

Thank you, and good tip about the grass. Will try to put that in place so the animals hopefully don't clear it out as fast this year.

Blimey, this was one stressful Spring 1. Wasted some time, like to Gus blocking me at Pierre's, but having the Gold Clock now helps a lot, as I "only" need to scythe grass, hoe, fertilise, plant and water everything. Couldn't quite get the lower left corner, and fell asleep after putting the last strawberry in the ground just above that section. It's hard to do things over there, because the screen doesn't move with the farmer, like it does for most of the rest of the whole area. First time testing out Reaching on the Hoe and Watering Can, and I'd say it helps a lot, because now everything lines up perfectly due to the 5x5 area of the tools. 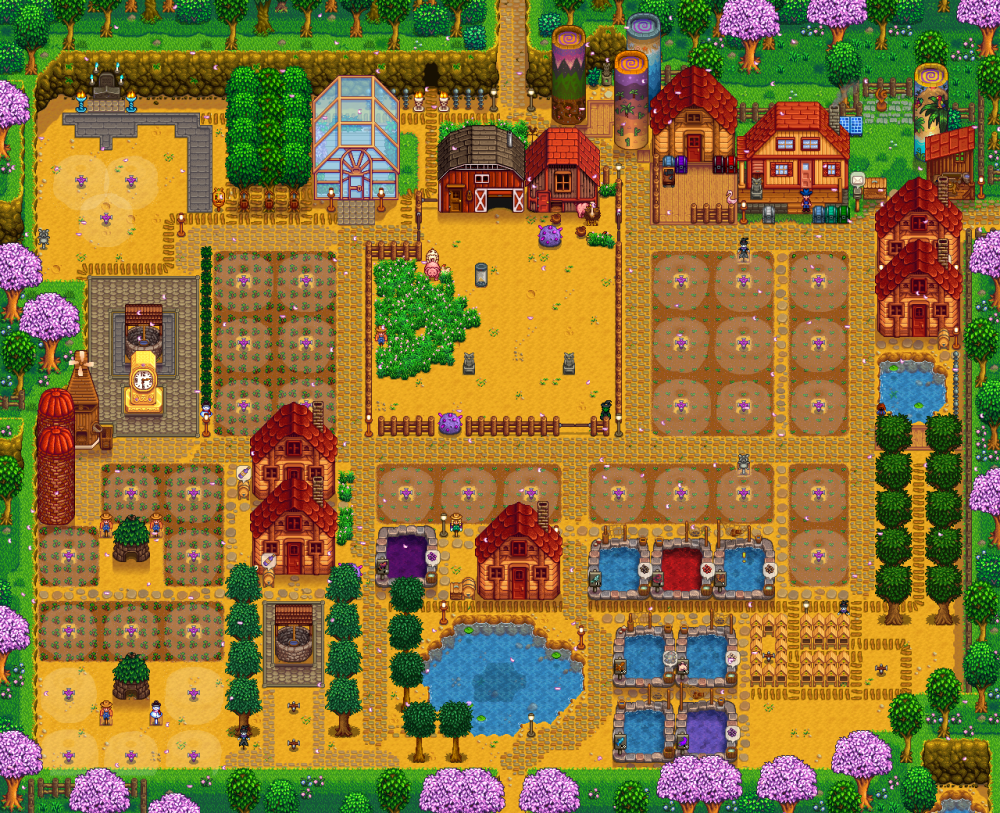