I've been working on a mod for a new location, Fern River (originally called Fern Valley). I have maps, houses (some rough and some finished) and a concept - I would really like to work with others to make this an awesome mod! There are a few spots for your NPCs as well, if you want to add your own.

While I like the way this is shaping up, I am not hard-line on everything staying the way it is. There is always room for improvement and that's one of the great things about working with other people! I would love people to add their own stamp to the work. Want to design a diverse group of NPCs? This is your mod!

Concept: Fern River is a peaceful community in a wooded river valley near Stardew Valley, accessed through a passage by the wizard’s tower. The inhabitants are a bit peculiar at first, but gradually reveal their true nature as semi-mythical beings from around that world, drawn to the valley by the promise of a quiet life around others who accept them for who they are, and the eccentricities of the region.

Setting: Fern River is a bit better off than Stardew Valley (the houses have bathrooms!). Houses reflect the owners’ personalities and heritage, with community amenities such as a swimming pool, playground, grocery and bathhouse. The inhabitants tend to be in tune with nature, being primarily spirits of nature, and spend a lot of time maintaining their gardens enjoying the environment. Once a year, they have a fair where they shed their human forms and appear as they truly are, opening their village to trusted humans at that time. Despite being mystical beings, they have many down-to-earth concerns.

Inhabitants (current - can change if needed) 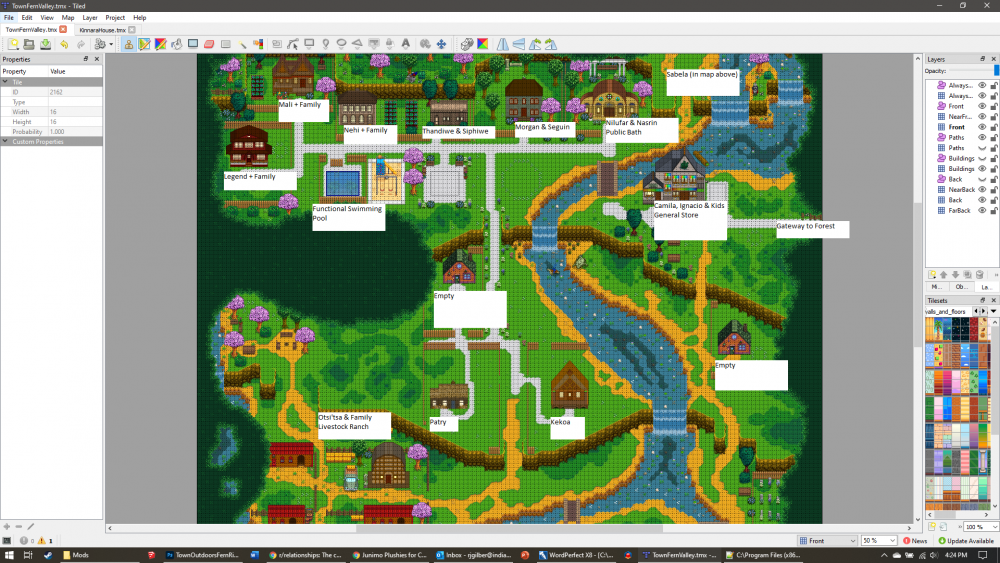 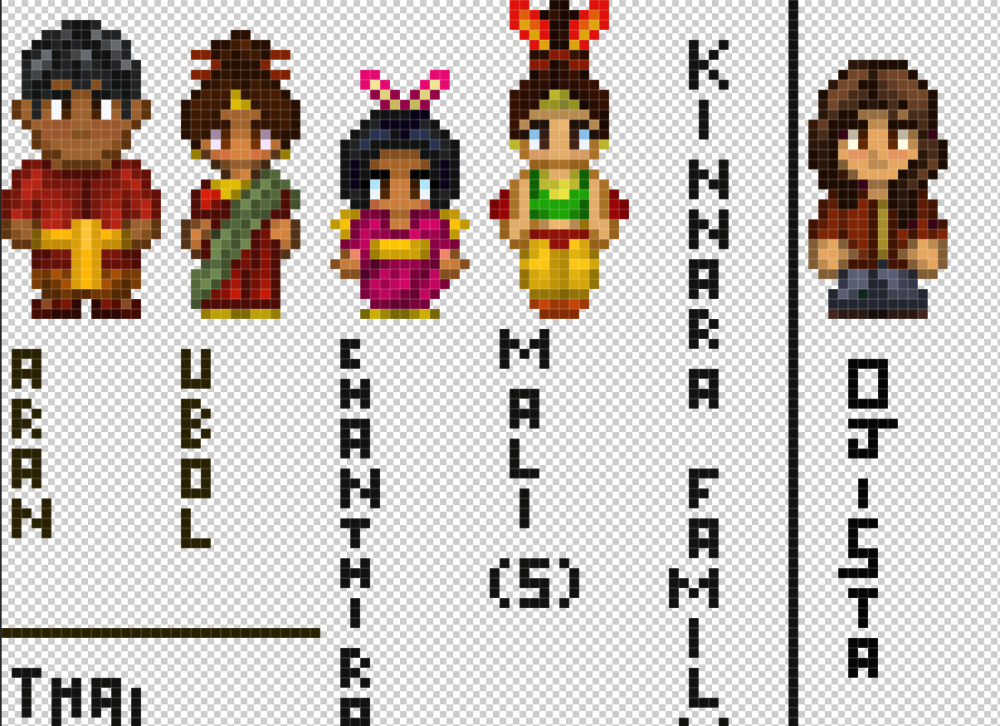 :
Family One: Based on Kinnnara (half-bird, half human) from Thailand. Kinnara are skilled at music and dance.
Name Age/Role/Gender Personality
Ubol Adult
mother
female More interested in crafts like painting, pottery and weaving than dance and music, although she joins in to keep her family happy. She has a bad leg from an accident, which limits her dance abilities.
Aran Adult
father
male Very dedicated to teaching dance and music to all comers, and an experienced teacher in traditional arts
Chanthira Child
female While she likes traditional arts, she prefers to be outside playing with her friends. She mostly learns if she's promised a reward
Mali Teen
Single
female A very dedicated daughter, a dancer and musician who sees it as her responsibility to do her best at everything. Chanthira's laissez-faire attitude sometimes irritates her


Family: Based on the Iroquois Gandayah, a form of Jogah who look after Flora and help respectful farmers.
Name Age/Role/Gender Personality
Ojistah Adult
mother
female Warm, welcoming and inclined to spoil her animals, Ojistah is also not willing to put up with nonsense.
Tier Adult
father
male Gruff and terse at first, it becomes increasingly clear that Tier is simply not a big talker. He can be found sweet-talking his animals when he thinks no one is looking
Otsi’tsa Teen
Single
female Like her mother, Otsi’tsa is warm and kind but no-nonsense, especially where the care of her animals is concerned. Her favorites are the cows.


Family: Based on the Aziza (yumba) of West Africa (Fon) tradition. They are wilderness keepers and rangers.
Name Age/Role/Gender Personality
Isi Adult
Mother
Female stern but loving, she keeps her family in line and warns the player about abusing resources. She raises herbs and natural remedies in their greenhouse, and is the community health provider.
Idah Adult
Father
Male Cares for wildlife that has been injured or orphaned, and is easily befriended
Nehi Teen
Single
Male Scholarly, enjoys research and study into the natural world, wants to stay in the valley to conduct research while earning his college degrees
Ivie Child
Female An explorer, curious about the world around her and sometimes getting into trouble because she gets so involved in what she’s doing that she loses track of what’s around her. She and Maite are best friends


Family: Western European fairy tradition. Morgana and Seguin are nominally the town mayors, but that essentially means they have a big desk in their house.
Name Age/Role/Gender Personality
Morgana Elder
Female Very responsible, feels she is the authority even though no one really pays too much attention. She is aware of that but knows someone has to pretend to be the leader when strangers come around. She has her role mostly because she is willing to interact with outsiders.
Seguin Elder
Male Not as responsible, more live and let live, Seguin enjoys spending time in Stardew Valley, especially going to the pub on the weekends. Likes to tell tales of his adventures in the old days (really old days).


Family: An elderly Chinese couple with an adopted son who is actually a cloud lion dog. They are a jollly, outgoing couple who enjoy teasing each other and occasionally throwing drunken hootenanies.
Name Age/Role/Gender Personality
Sage Elder
Male Frequently found in the square entertaining others with his story-telling. He is wise but sometimes it can be hard to tell when he is being serious
Fable Elder
Female Teaches the village children in the old ways, often through story and metaphor. She keeps Sage from being too silly, but isn’t above being goofy herself.
Legend Teen
Single
Male Sage and Fable’s son, actually a transformed lion dog. He is very shy but very loyal, and can be fiercely protective. His only outward sign of his transformed status is silver-grey eyes.


Family: Siphiwe and Thandiwe, a brother and sister with albinism who sought shelter in an anthill when they were being burned by the sun. The anthill was actually a fairy mound, and the siblings became fast friends with the fairies, eventually settling in Fern River
Name Age/Role/Gender Personality
Siphiwe Teen
Single
Male As the older sibling, he feels responsible for his sister and wants her to have the best life possible, but also worries he does too much for her. He loves animals, and takes care of the town dog and cat, Shuck and Malkin
Thandiwe Teen
Single
Female Siphiwe’s sister, wears glasses, prefers to stay inside because the sun makes her eyes hurt, but dislikes missing out when she does. She paints the family house every year and is often out sweeping and weeding later in the day.


Family: Anhangá (natural form, a white deer with fiery eyes), a protector of wildlife who helps animals escape from hunters. They have a pet Alicanto and run (and live above) the general store. They don’t sell meat.
Name Age/Role/Gender Personality
Camila Runs the general store.
Ignacio Helps with the store, but mostly watches the children. Runs the stand during festivals so Camila can enjoy time with the children.
Maite Child
Daughter
female The three children are triplets, and very different. Maite is a tomboy, who is often a bit grubby and messy.
Floriana Child
Daughter
Female Enjoys dressing up, concerned about staying neat and tidy, frets over her siblings
Alonso Child
Son
Male A bit of a prankster, likes to play jokes on his sisters, but generally nothing harmful


Family (Singles)
Name Age/Role/Gender Personality
Sabela Teen
Single
Female Curly light brown hair, small and slender, with a fondness for treasure. Gives gifts based on gold and jewels. Associated with rivers and lakes (lives in water). A bit arrogant and greedy at first appearance, being very interested in what the player has acquired, but it’s more because she wants to know than wants to have. Based on Asturian xana
Nasrin Teen
Single
Female A dancer who also loves to cook and feed others. Mali’s best friend. She is often in the Kinnara home. She often takes charge of community meals and runs the community bathhouse. Based on the Persian peri. She and Nilufar are roommates
Nilufar Teen
Single
Female A cheerful young woman who was adopted by fairies, and lives among them despite not being one of them. She uses a wheelchair, and doesn’t mind as long as someone helps her with stairs. Straightforward and playful, she likes to have fun. She and Nasrin are like sisters, and although they usually get along, they occasionally ruffle each other’s feathers.
Kekoa Teen
Single
Male (based on a mo’o, a shapeshifting, amphibious lizard spirit) Dislikes the cold or being too far from water, often seen fishing or doing something with water or trees. Bananas are a favorite. Rather embarrassed by his lizard form at first, tends to be shy and appear stand-offish, sometimes overly polite.
Patry Teen
Single
Male (Orkney Island spirit, of the type that wear armor and battle) loves exploration and mine-diving. Independent and worried about being strong enough to keep everyone safe - sees himself as a protector and provider.

Hey, congrats on what you've gotten done so far! I think it's always easier to sell people on a collab when you already have things to show, and can demonstrate what you'll be able to do on your end.

This subforum is pretty quiet, because most of the modding community is active in the Stardew Valley Discord server. If you haven't already, I'd see if there's anyone interested in the #making-mods channel -- you can always link to this thread when describing what you're looking for!

A lot of people will of course already be working on their own projects or might have joined others, so if no one bites right away, you could always post again after reaching another milestone :)

That's a great idea, thanks! I appreciate the encouragement - I've always done my mods on my own so I haven't tried looking for collaborators before.

This is actually really cool.