The 1.5 update is out on mobile devices now, so we can start collecting reports of any potential problems. If you encounter any issue in this update, please post below and give as much information as you can. Below is a form you can use to report your bug, and then we have the game updates listed to show the fixed bugs and to show you which version of the game you may be on if you're having certain issues.

NOTE: please make sure you have the latest update before posting your report... your issue may already be fixed. To check the version of your game, press the '?' on the title screen of your game and go to the lower left corner.

We'll be redirecting mobile 1.5 related posts to this thread to try to keep it all in one place. Thank you!
Do not click the "reply" OR the "report" buttons on this message! Make a post with your bug report by typing at the bottom of this page.

Bug Report Form
Please use this form to report your bug. The more information you can provide, the more it'll help us!

Type of phone: (be as specific as you can!)
Details of your issue: (e.g. what is happening and where? what were you doing in the game when this happened? are you consistently experiencing this problem?)
Screenshots/video: (highly encouraged)
On the day of your issue, did you load your game through the Load Game menu (you wake up in the bed)? Or was it an "emergency load" (i.e. one where you start mid-day wherever you left off)?
Any other info that might be relevant: (additional details that maybe don't fit in the main issue or something you think might be related)
Click to expand...

Game Updates
NOTE: The updates "roll out", which means that only a small % of players (randomly chosen) will have it at first, which ramp up afterwards. If you don't yet have these updates, you will, so please be patient!

1/7 6:30 PM PST: 1.5.6.32
-Fixed crash involving children
-Auto-grabber inventories now function properly
-Fixed toolbar being stuck when using toolbar padding
-Fixed Junimos not depositing their harvests into the hut
-Virtual buttons no longer draw during intro
-Horse is now easier to dismount
-Foraging while on a horse is now re-enabled
-Fixed issue where you could get stuck outside the map if you dismounted a horse
-Fixed inability to tap geodes onto Clint's anvil
-Increased size of Korean text
-Added Chinese language back into the game


1/9: 1.5.6.34
-Fixed two invisible buttons control scheme not working.
-Fixed player freezing after tapping a horse while using a tool.
-Fixed closing a menu which contains a stardrop adding it to your inventory instead of consuming it.
-Fixed some museum rewards not removed when collected.
1/10 10:25PM PST: 1.5.6.35
-You can no longer auto attack in the slime hutch unless you have a weapon selected
-You can now place furniture on top of rugs
-Fixed disappearing weapon upon unforging
-Fix for inability to leave festivals using tap-to-move
-Actually fixes the missing horse after emergency load
-Actually fixes the missing shipping bin deposits after emergency load
-Potentially fixed a few strange crashes

1/12 10:17 PM PST: 1.5.6.36
-Fixes a crash at the end of the night if you used a mini shipping bin while having a special order quest active
-Fixes a dupe glitch and an item loss glitch
-Added some missing Chinese translations
-Stopped the extended fish family and the pina colada from showing up in the collections tab
-Fixed a crash in the Android storage migration code
-Fix for gamepads closing out dialog menus instead of finishing text
-Fixes a crash that can happen if you're using a gamepad in an inventory menu
-UI/scaling improvements on some iOS devices

1/17 11:25 PM PST: 1.5.6.37
-Fixes issues where the profession chooser would keep showing up each night
-Fixes extra hp that may have been gained by the profession chooser bug
-Fixes issue where you couldn't donate to special orders on high resolution
-Fixes weirdness with the mill inventory
-Makes pathfinding to parrot express platforms smarter
-Fixed incorrect names and icons for journal scraps in the collections tab
Last edited: Jan 18, 2023

Just a minor bug, but there's an arrow on my screen.
Type of phone: vivo 1935
Details of issue:

I was on the mine, at floor 65. When I clicked the floor 65 button in the lift thingy, an arrow appears. This occurs everytime I click anything other than the buttons on the menus.

P.S. I found another bug. Everytime I load a save, the toolbar increases in size, but when I enter the controls menu and leaves, it turns to normal.
Last edited: Jan 6, 2023

Hi there, please find the bug below:

Bug: App crashes after continuing where user left off

Details of issue:
Steps to reproduce:
1. Open app and load game from where user previously left off
2. See game starts where user left off (Beginning of a new day, in the farm). Wait for a few seconds.

Additional details: Seems like it happens if I try to continue where I left off. If I don't, it works fine so far!

Screenshots/video: as attached (sorry I can't upload the vid bc file is too large :( )

Greetings, I have recently gotten the new update of Stardew Valley and i found a few bugs.

Issue: Game randomly crashes after a few seconds. And when you exit the game, your horse teleports back to the Stable. Also, the menu and the speech boxes seem much wider than before.

https://twitter.com/i/web/status/1611630603535024129
One info is that i still have some old 1.4 mods still in the mods folder and played on that save file with the mods, but i did not do anything major. I have deleted most of them, but these bugs keep happening.

Thank you in advance. And i am sorry if this was caused by my own actions, i do not mean to waste your time.
Last edited: Jan 6, 2023

galaxy s21 ultra
1. can no longer pick up foraging items off the ground while mounted
2. dismounting is sometimes more difficult, occasionally I have to click multiple times till it is just right, instead of dismounting it kinda moves you around a bit
3. used to be able to see more of the map by swiping w 2 fingers, no longer works, instead it zooms in and out
4. slimes seem to jump extra long distances or something
5. phone vibrates NON STOP while fishing when the green bar is on top of the fish
6. my animals are chilling outside while it rains

Issue:
Joystick and buttons are showing in intro cutscenes

issue: some animal items when collected are disappearing

Thank you for the update. I don't know if it's a bug but my toolbar is usually located on the left side and on the new version, I find it hard to scroll it up and down to select my items. I already expected a few bugs since it's a new update, so waiting for those patches soon. I keep trying to scroll up with it won't let me do so.
Last edited: Jan 7, 2023

Type of phone:AQUOS zero
Issue details:When I retrieve an item from an automatic harvester, other items in the same row as that item disappear and I cannot get them. 3 times I tried and the same bug happened.
(This is written using machine translation.)

RIZE said:
Type of phone:AQUOS zero
Issue details:When I retrieve an item from an automatic harvester, other items in the same row as that item disappear and I cannot get them. 3 times I tried and the same bug happened.
(This is written using machine translation.)
Click to expand...

Seconding this. Happens in both coop and barn.
I'm playing on a Fairphone 3.

Seifer said:
Thank you for the update. I don't know if it's a bug but my toolbar is usually located on the left side and on the new version, I find it hard to scroll it up and down to select my items. I already expected a few bugs since it's a new update, so waiting for those patches soon. I keep trying to scroll up with it won't let me do so.
Click to expand...

Adding some more info on this bug if that's ok, Seifer. Seems like the scrollable area is only at the empty space of the toolbar (circled in red in the image attached). So if user tries to scroll at the area where the items reside, they're unable to unlike before.

I couldn't do the save file transfer.
My phone wouldn't let me access the internal storage, only the SD card. Infinite loop, until I hit "skip" (in the confused hope the process would just be cancelled without result). Now my two save files are gone. Is there a way to retrieve them??

Edit 5 mins later:
It didn't work the first time. But restarting the app did help. Internal storage was accessible. Even my save files still exist.
WOAHHH, nearly gave me a heart attack!

Next Edit:
I completed the Fall Foraging Bundle. The reward automatically jumped in the third row of my inventory, as I tried to pull it into the inventory. I haven't bought the second backpack yet and I cannot access it. (Screenshot attached)

Secondly, auto attack doesn't work as smoothly as it did. My avatar didn't block slime-attacks in the mines and took ridiculous hits. A sword was in the inventory and selected.

Type of phone: Huawei Mate 20 pro (Android)
Details of your issue: game doesn't optimize in my screen, some buttons are out of the screen, and there is a blank gap above looks like the resolution is not compatible with my phone screen. buttons are somewhat responsive at times, also the date box seems to be so big even I set it to 25, I didn't have these issues with the last version in mobile. thank you!

Type of phone: Nokia G11
Details of your issue: Strange lines appear when water moves in the river. 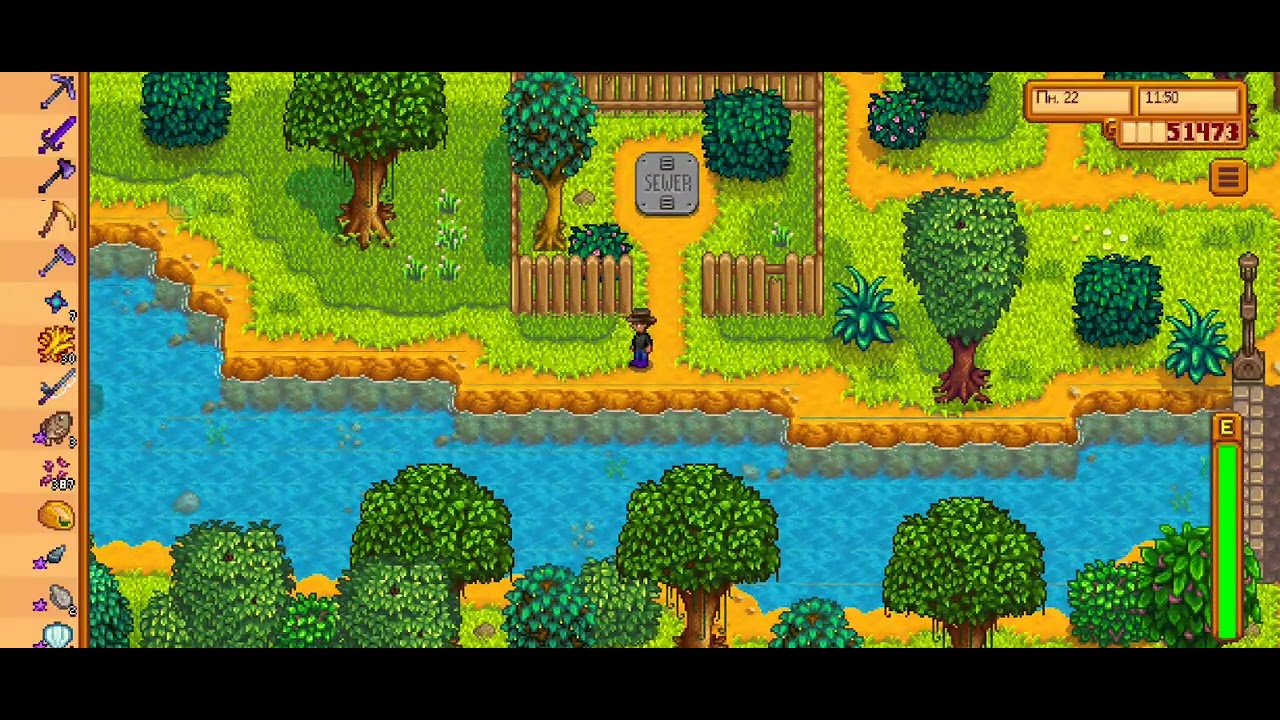 SW lines in the river

type of phone: Redmi Note 9 Pro
details of issue:
1. difficult to scroll the vertical toolbar
2. bug in the automatic harvester (video linked)
3. i never pay any attention to it in the previous version, but apparently the auto attack can be triggered without clicking any weapon in the slime hutch and can't be turned off (i couldn't stop slashing those slimes)

Type of phone: Sony Xperia XZ1 Compact
Details of your issue: Junimo hut auto harvest is bugged, they harvest the produce, but don't bring it to their hut. It's just lying around and gone the next morning. Walking past, the PC picks them up automatically.
Screenshots/video: 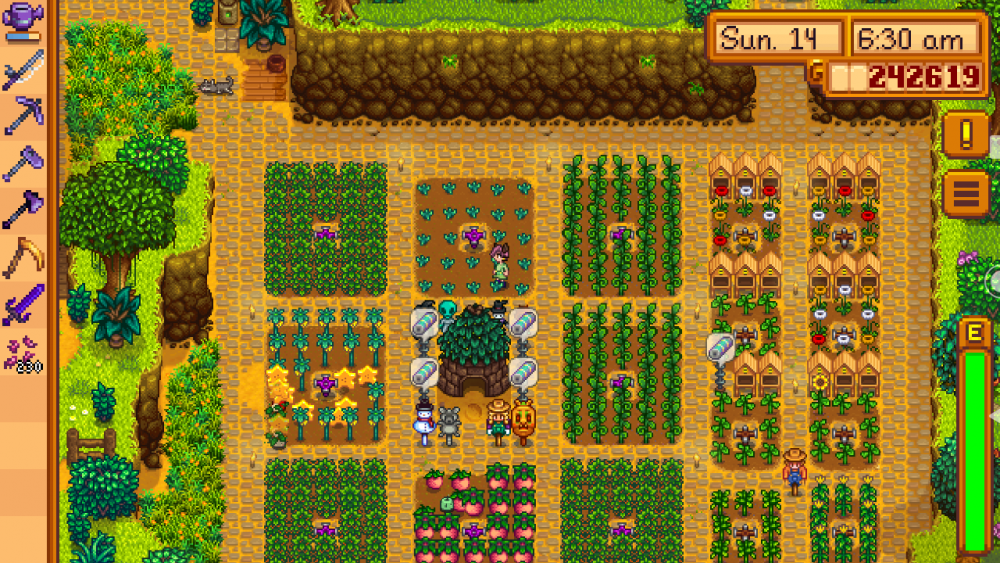 Ereo said:
Seconding this. Happens in both coop and barn.
I'm playing on a Fairphone 3.
Click to expand...

Thirding that (Sony Xperia XZ1 Compact). It also wouldn't let me select/open the auto harvester at all the first few times I tried.

Type of phone: LGv20 Lineage OS 18.1 (Android 11)
Details of your issue: The Date Box is HUGE if set at 50 or lower. The other elements scale correctly, it's just the Date Box that doesn't scale correctly. Screen resolution: 2720x1440
Screenshots/video: 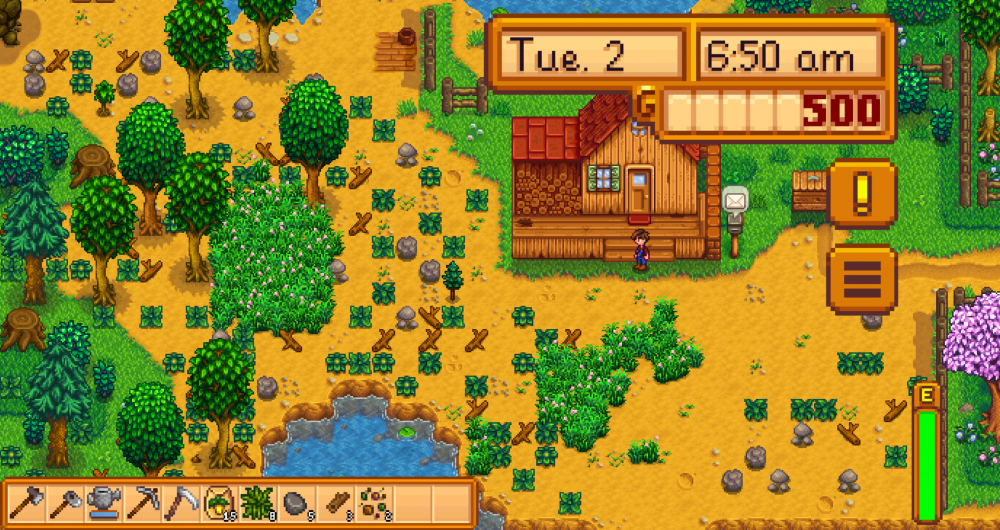 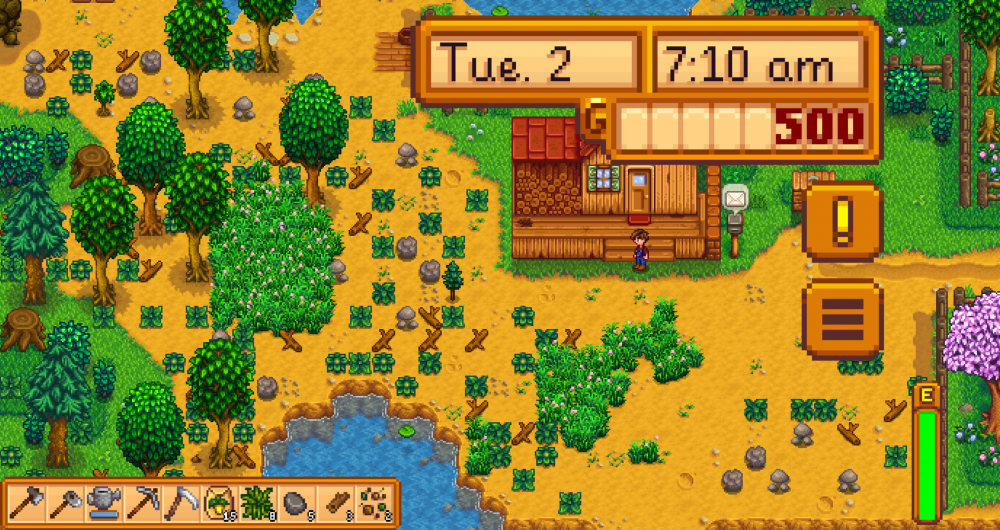 I cannot interact with some kegs in big shed. Even I cannot broke.