It is the fullness only attainable by grokking the completexity of Jewel Tones. Colorful imbuification of extra planes of existence defined not only by a b and c but also x y and h and occasionally this thing: φ. The intensity of color saturation which would otherwise destroy an HDR monitor and confuse a fotosetter is instead converted to other forms of matter which can be comprehended only by enlightened persons who are one with dye and wool. Your brain cannot process this out-of-bounds information and resorts to...

But why does the Farmer only experience this once in the game? Because you must do what was verboten in those movies about the spirits. Sigh, not Cocktail! No, not Tequila Sunrise, either!! Ghostbusters and the second Ghostbusters. There can only be two, don't argue. Anyway, you must cross the streams. What, no, not get the hem of your dress wet, are you even paying attention?

You must cross the metaphorical streams of: sniffing the stuff that Emily is sniffing (coincidentally the same stuff you get in a few other places like the Wizard's Tower), but also the secret second ingredient:

What? Yes I'm serious! She does that every Tuesday while the ladies work out-- yet that room remains decidedly tentacle-free. And surprisingly there are few rainbows or tropical fruit spotted at the Wizard's Tower or in the sewers or Mines during infestations.

However, bring together the twin flashpoints of foggy sniffy stuff and Emily's dancing posterior and suddenly aliens, peaches and all sorts of colorful stuff pops into existence.

Yeah dunno about the aliens, though. Could be they like dance music and '80s radio finally reached their planet.

I think all those symbols suit her as a character. I guess it was her unique seduction strategy. –it was effective because it is not easy to forget it.

The alien head represents extraterrestrial, weirdness, and uniqueness. She wants the Farmer to know that she is unique and different. – she can think outside of boxes.
The *jellyfish symbolizes dreams. It makes sense that Emily has lucid dreams almost every night.
Plus, the peaches symbolize feminity and beauty.
The banana symbolizes happiness and sensuality. I can see why she is trying to impress you with her ankle and bootie shaking.
Lastly, the rainbows represent hope.

She has so many great qualities. I am sure a lot of men find her attractive.
I think CA did an excellent job creating unique, attractive female characters like Emily.

Edit: other women would find her attractive as well. I can see why Clint is into her.
*Jellyfish symbolism is complicated to interpret. It can represent love.
Last edited: Oct 8, 2021

One more fun thing, her dancing and her outfit remind me of this emoji

. The dancing lady in a red dress.
I wonder if CA took inspiration from the emojis... 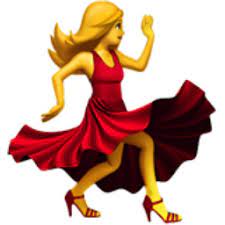 Laissez_Faire_Farming said:
I wonder if CA took inspiration from the emojis...
Click to expand...

EDIT: Oh yeah ahem George did mention raccoons blah blah. If you know what I am talking about.

Laissez_Faire_Farming said:
symbol of deception.... a theft like Linus.

EDIT: Oh yeah ahem George did mention raccoons blah blah. If you know what I am talking about.
Click to expand...

Hey, I think racoons are awesome. Linus is awesome. I meant it as a compliment, not an accusation.

imnvs said:
Hey, I think racoons are awesome. Linus is awesome. I meant it as a compliment, not an accusation.
Click to expand...

My apology, I am not in good mood today. That could be why.
Linus is also sweet and a great scavenger like a raccoon.